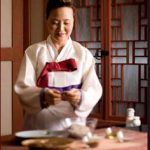 As a principal researcher of the Research and Development Project for the Standardization of Korean Cuisine, she has been leading the effort to popularize and globalize Korean food. She has been conducting diverse R&D, lectures and writing books, and also acting as a public ambassador for the globalization of Korean food at various overseas exhibitions. She presented the Special Exhibition of Korean Royal Court Cuisine during the APEC Korea in 2005 and promoted the 4th Korean Food Festival at the UN Headquarters in 2007, which won high praise from ambassadors and overseas journals for the beauty and excellence of Korean food. Major works inclue: “Korean Food,” “Traditional Korean Food,” “The Store and Fermentation Food of Korea,” “Korean Traditional tteok,” “Cookies and Beverages,” “Good Morning, Kimchi,” “Gyuhapchongseo,” “The Beauty of Wedding Food” and more.